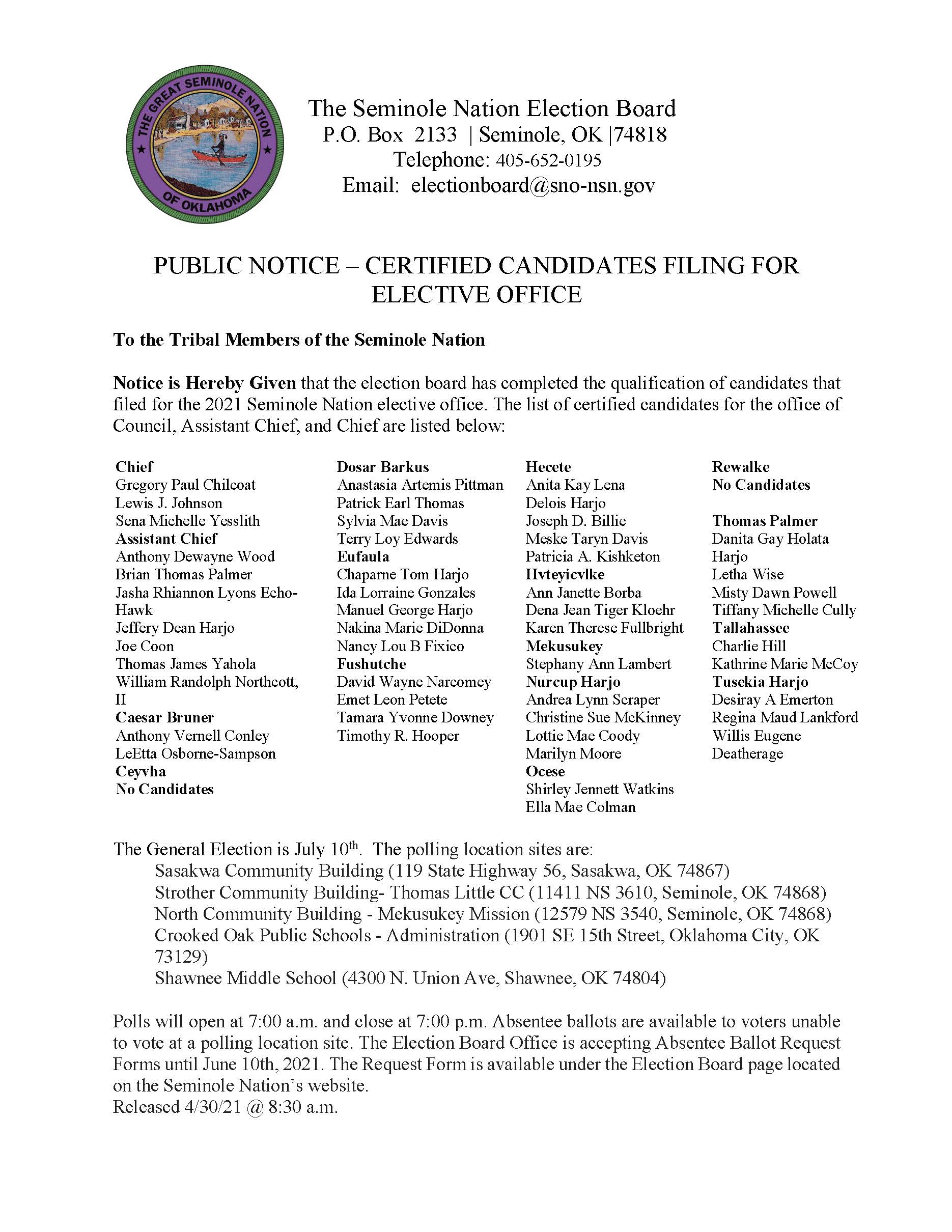 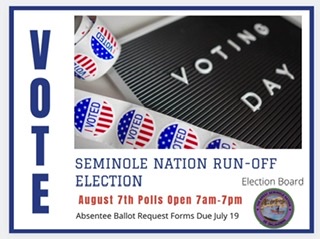 ONLY CHIEF AND ASSISTANT CHIEF CANDIDATES MAY USE FORM BELOW:

CAN I VOTE?
You can vote if you are a member of Seminole Nation and are 18 years of age at the time of the election.

DO I NEED AN ID TO VOTE?
Yes, you will need to have a picture government ID. Examples of IDs accepted include: State Driver's License, Tribal Picture ID, Picture Passport, or Military Pictured ID.

DO I NEED TO UPDATE MY ADDRESS/LAST NAME AT THE ENROLLMENT OFFICE?
Yes/No, if you will be voting absentee. (The ballot will be mailed to the address on the Request for Absentee Ballot, however Enrollment will still need to update your records.)

No, if you will be voting in person. (However, we strongly encourage you to verify/update your information. See Update Information on the Tribal Enrollment Page for document.)

WHAT DO I NEED TO DO TO REQUEST AN ABSENTEE BALLOT?
Requests for absentee ballots for the general election have expired. June 10th, 2021 was the deadline.

WILL I NEED TO REQUEST AN ABSENTEE BALLOT FOR THE RUN-OFF ELECTION?
Absentee Ballot Request Forms for the run-off election shall be automatically mailed to those who requested an absentee ballot in the primary election. For those that prefer to vote by absentee that did not in the general election may request a form or download it from the Seminole Nation Website under the election page. Absentee Ballot Request Forms must be received in the Election Board Office by close of business on July 19, 2021. The absentee ballots for the run-off election must be received by the Election Board no later than the last mail run on August 7, 2021.

HOW ARE THE COUNCIL REPS WINNERS DETERMINED?
Council Members are elected by band members by a plurality of the votes cast. Tie votes for Council Members shall be decided by their bands. The election board will not organize a run-off for the council seats. Each of the bands will decide this process.

WHAT IF THERE WERE NO CANDIDATES RUNNING FOR COUNCIL IN MY BAND?
In the event that no candidate runs for the General Council seat(s) in a particular Band such that the Band must internally nominate and fill the vacancy thus created, the individual(s) so nominated must pay the candidate filing fee set by the Election Board in the same amount as that paid by candidates who run in the general election.